We are both farmers and farmhouse cheesemakers, and here deep in the heart of rural Ireland, our pedigree grass-fed cows are free to graze the rich pastures around our farm for up to 9 months of the year. Cashel Blue® is named after our local “Rock of Cashel,” a medieval castle that was once the seat of the Kings of Munster, where lore has it St Patrick started the conversion of the pagan Irish to Christianity.

Cashel Farmhouse Cheesemakers is a 100% family-owned and managed business. When Louis & Jane Grubb moved back to the family farm in the late 1970s, their ambition was to harness the quality of their sweet, creamy milk to make a traditional farmhouse product, and in doing so to provide a livelihood for their family and locality. From this notion Cashel Blue® was born. Today, family and community remain as core values to our philosophy and business. Cashel Blue® continues to be made in a traditional manner by the second generation, Sarah and Sergio Furno. We also make Cashel Blue Organic, Crozier Blue – Ireland’s only Sheep’s milk blue, and Shepherd’s Store, our hard sheep’s milk cheese.

Our milk comes from local, grass-fed friesan cows from a maximum distance of 25km. After we gently pasteurise the milk, Cashel Blue® is made in open-top vats, and the curds are cut and stirred by hand. Cheeses are typically aged 8-14 weeks in our maturing rooms. We have developed a bespoke quality approach that combines strict criterias of wine-tasting with the skills of cheese maturation. Each vat of cheese is individually tasted and graded several times prior to leaving the farm. 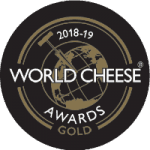 We use cookies to ensure that we give you the best experience on our website.OKREAD MORE